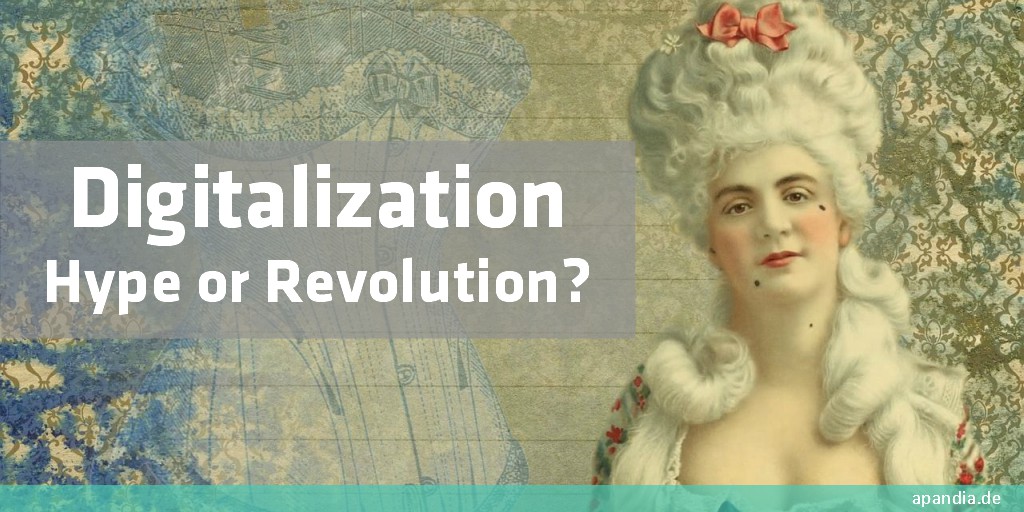 Coupled with the concept of digitalization are almost daily reports about the welfare and misery that it will entail. But what exactly is behind the term and how should digitalization be evaluated? Do we really need them? What are the opportunities and risks and what is the digital transformation?

The term digitalization refers to the current phase of technical development. Data and information can be made available almost everywhere and at almost any time, and it is no longer a real problem to save a design drawing and create the workpiece immediately by 3D printing on the other side of the world. Digitalization is there and brings with it other concepts that are to be regarded as part of it. These are extracts of Industrie 4.0, Cloud, Big Data and Internet of Things from a more technical point of view and terms such as Arbeit 4.0 from a more social point of view.

Digitalization will take place in the same way as any other technological revolution – starting with the first weapons and tools about 2.5 million years ago. The winners will be those who face the new challenges. But this process is much faster than in the 18th and 19th centuries.

For example, a current smartphone has more computing power than the computer cabinets used to control NASA’s moon landings! The spread of technology is also extremely rapid: by mid-2015, there were already around 46 million smartphone users in Germany. As a reminder, the iPhone was launched in 2007.

The implementation of digitalization or digital transformation is a creeping process that means the automation of routine tasks. As a result, work processes change. This can certainly mean that a process has to be questioned and rethought from start to finish! Digital communication or social media channels such as LinkedIn, Facebook, Twitter and Co. form only an adjunct work.

How must digitalization be done?

You don’t have to digitalize the entire company overnight. My tip: Start where your company’s greatest added value lies! Even within an industry, this can be completely different.
Is your reputation or marketing focused so that your customers buy from you because you

There are already three different approaches to the same product, where digitalization should begin. Strengthen the area with which you achieve the highest added value!

By automating routine tasks, you free up resources for your employees, enabling them to concentrate on the coordination and control of complex processes and individual requirements.

In the following I will show you three examples of what is meant by small-scale digitalization:

There is a difference between deploying an employee who checks whether required certificates are expiring, or whether a system automatically monitors and reports them and starts a workflow that triggers an extension of the validity period. If, for example, first-aid certificates or visas expire, the software informs the affected persons in advance and fully automatically by email, SMS or other medium and initiates further measures.

Electronic invoicing: Benefits that pay off

Another example is ZUGFeRD, the standard format for electronic invoices in Germany. According to the Federal Ministry of Economics, this procedure saves an average of ten euros per invoice on the outgoing side! In addition, customers pay the invoice on average 5.3 days earlier. On the input side, the savings are even a little higher. Incorrect entries in the inbox are also avoided.

If machines or plants are also integrated into a process, we speak of industry 4.0 (in Germany). This is how we have linked the meter readings of the consumption meters (electricity, water, gas, air, etc.) at City Airport Bremen directly to the calculation and billing. All the way to automatic transfer to Financial Accounting. Manual intervention is only necessary when replacing meters. The calculation of the prices and the settlement with the tenant is automated.

If you want to keep your company up to date with the latest technology in order to survive on the market, you must definitely work out a strategy. You always have to be flexible in designing a strategy today, because things change so quickly that we have to „drive on sight“ nowadays. Once the strategy has been defined, it is a matter of redefining the respective business processes from the point of view of the current state of the art. In order to implement this effectively, we need platforms that are highly flexible, so that necessary process adaptations can be implemented at any time.

Always take one step at a time. Because every step of the digital transformation will lead to new steps. This means that work will no longer have to be carried out in the office and at a certain time. This in turn changes new processes, which have to be restructured. If you don’t have a strategy, it leads to a real problem. Changes resulting from digitalization affect the entire working environment and no longer just IT.

Opportunities and risks of digitalization

Whenever something new comes in, it also warns of the risks. This was already the case in 1835 at the opening of the first German rail link when brain diseases caused by speeds of more than 30 km/h were warned. Something is still happening today, and we cannot yet assess the effects of this. This inevitably triggers fears. On the other hand, we should bear in mind that prosperity has increased with every technical revolution.

Do not oversleep this profound change

The greatest risk of digitalization is if we do not participate. The coachbuilders did not see any future in the cars at the time and who knows whether the automobile industry of today will really develop the mobility of our future.

IT security is a factor that must be considered in the context of digitalization. The further you have to open your systems to the outside world, the greater the effort and expense of protection. But there are also solutions to this problem, which we also report on in this blog.

The opportunity offered by digitalization is that it simplifies global action and also increases the efficiency of your company. Working will become more flexible and for many people it will be easier to reconcile family and work. It seems to me as if there is a possibility that this stage of the technical revolution will enable us to further increase social prosperity.

Digitalization is neither good nor bad. It’s what we make of it.

My recommendation: Take a close look at the opportunities and risks of digitalization for your company! Develop a digitalization strategy – one that remains flexible enough to respond to the rapid changes in the digital world. And now start with the first steps.

We support you with digitalization

Send us a short message and we will get in touch with you so that your company can successfully embark on the path to digitalization.